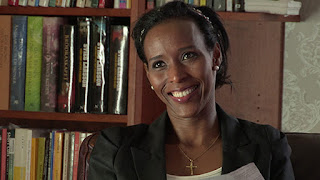 
Mona Walter originated in Somalia but moved to Sweden. She discovered that the Muslim community in Sweden was very radicalized. In Somalia, Islam was adopted rather unconsciously but in Sweden it was more articulated.

She began to study the Koran and the life and character of Muhammad. She was shocked by what she found. She realized very quickly that Muhammad was a very immoral person and that the teachings he gave were also immoral.

These observations led her to abandon Islam. Instead, she began to try and educate other Muslims about the real nature of Islam. She now travels incognito and sometimes has police protection. There are even idiotic "progressives" who have accused her of racism.
Posted by Greg Hamilton at 05:40